What To Do at the Eiffel Tower Gardens: Flowers, Photos, Fun 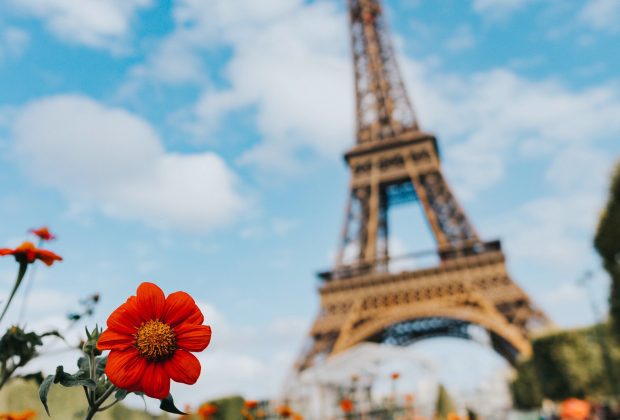 Visiting the Eiffel Tower gardens is something everyone who visits Paris should enjoy. They are beautiful any time of year but especially in spring when daffodils, irises, lilies of the valley, and more bloom.

Take a page out of the Parisian’s lifestyle handbook — when the weather is fair, bring a picnic and spread it out on the grass in the shade of trees that are several hundred years old.

Then admire the Eiffel Tower from behind a mass of tulips or through airy cherry blossoms.

The 2,000 hectares (nearly 5,000 acres) of gardens include not only those around the base of the tower but also the 780-meter-long (that’s 2,560 feet) carpet that stretches from the tower to the École Militaire, whose Baroque facade faces the Eiffel Tower.

Although right now, as it so happens, you can’t quite see the École Militaire from the Eiffel Tower gardens because a temporary events venue, called the Grand Palais Éphémère, has been erected. This building is hosting major events usually held in the Grand Palais and will also be the venue for some Olympic competitions in 2024.

Fun fact: The 122-year-old Grand Palais, a little further upstream along the Seine from the Eiffel Tower, is currently being renovated for the Olympic Games.

On the weekend and Wednesdays, when French schoolchildren have a free afternoon, you’ll see this garden packed with Parisians and their kiddoes. There’s so much for children to do here:

Towards the École Militaire, there are playing fields where adults and older kids might even join Parisians and visitors in an informal game of soccer or basketball — or even a traditional French game of boules.

Have younger kids? Here are my tips

If you have young children, take them to the mechanical merry-go-round on the corner of avenues Charles Risler and Pierre Loti. That’s two-thirds of the way down towards the École Militaire in the west gardens. It’s open every day from 9 a.m to 8 p.m in fall and winter and until 11 p.m. in spring and summer.

The mechanical merry-go-round has been there since 1913. Every child sits on a wooden horse and is given a stick with which they have to try and catch a ring from a post every time they go past. Riding that merry-go-round is one of my favorite childhood memories!

An even older institution than the merry-go-round (because it’s been there since 1902) is the puppet theater in the east gardens on the Avenue du Général Marguerite. Shows are at 3:15 p.m. and 4:15 p.m. on Wednesdays, Saturdays, and Sundays. Doors open about 15 minutes before the show and tickets are €6 per person. The shows last about 45 minutes.

Local tip: Even if the shows are in French, the stories acted by the puppets are childhood favorites such as Little Red Riding Hood and Sleeping Beauty. So even if your little one doesn’t speak French, they’ll probably be able to understand what’s happening.

Who designed the gardens?

The gardens we see today were redesigned in 2018 by Vogt Landscape Architects to take into account the new security measures around the Eiffel Tower.

Here are a few of the upgrades the Eiffel Tower gardens enjoyed:

Surprisingly quiet, the ponds are one of my favorite places to sit and listen to the birds, watch the ducks, look at the koi carp and see the gray heron who comes here occasionally. He was there last weekend!

Everything to see at the Eiffel Tower gardens

Below, I’ll share what to do in both gardens before or after your tour of the Eiffel Tower.

In the west garden, walk along the Allée des Refuzniks that runs alongside the pond and you’ll reach a grotto and a small waterfall, shown above.

Notice on the right of the grotto a remarkable 200-year-old plane tree that stands 66 feet tall. You can climb a few stairs to the top of the grotto where there’s a bench in deep shade. It’s a pleasant place from which to enjoy a view of the Eiffel Tower.

Local tip: For the best photos of the Eiffel Tower from here, go in late afternoon when the sun will be at your back.

Don’t miss the tall brick tower with crenellations at the top, located just behind the grotto. It’s a former chimneystack that used to emit the smoke produced by the machinery that operated the lifts when the tower first opened.

On the other side, in the east garden, a stroll along the Allée Jean Paulhan will take you to a belvedere perched on a rock overlooking the pond.

Fun fact: The Allée Jean Paulhan is named for a French author, literary critic, and publisher born in 1884.

This is the side to be on if you’re visiting the Eiffel Tower in the morning so that the light is behind you.

Are the Eiffel Tower gardens free?

Yes, it’s free for anyone to enter the Eiffel Tower gardens.

In order to access the Eiffel Tower esplanade, the tower itself and the gardens at its base, you must go through a security check either on the Allée Léon Bourgeois in the west garden or on the Allée Paul Deschanel in the east gardens.

Fun fact: Those allées are also named for French figures from history, this time, two politicians. Léon Bourgeois (1851-1925) was a French prime minister and 1920 Nobel Peace Prize winner while Paul Deschanel (1855-1922) was the country’s president for a few months in 1920 until he resigned suffering from severe depression.

The rest of the gardens, one of the largest green spaces in Paris, has no perimeter fence and so is open to everyone 24/7. In fact, once the tourists have left, you’ll see the Champ de Mars is a favorite place for Parisian joggers!

Your perfect day in the Eiffel Tower gardens

If you’ve only eaten a picnic lunch, you’ll probably be quite hungry by the time you’ve whiled away the afternoon in the gardens. I suggest finishing the day (as long as you’ve booked in advance) with a delicious meal at the Jules Verne restaurant.

When you leave, you’ll get to admire the nightly show the tower puts on. Read our guide to the Eiffel Tower’s lights to learn more.