The Eiffel Tower at Night: Where and When to See the Lights 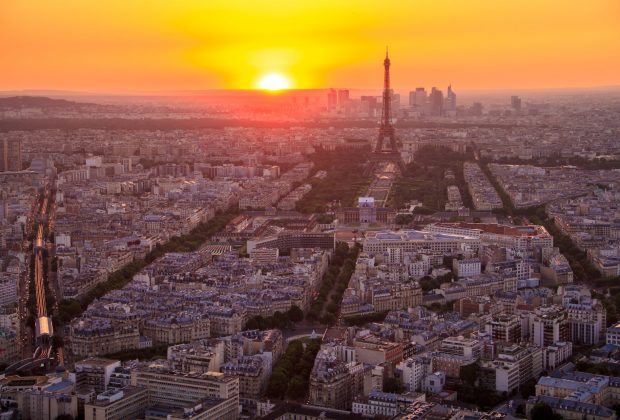 It’s true — from the Louvre to the Arc de Triomphe to the Notre-Dame Cathedral (even in its partially renovated state), Paris is a city dotted with world-famous monuments. Yet none are as iconic as the Eiffel Tower. Better yet, this stunning Parisian monument puts on a light show of its own every evening.

Depending on what time of year you visit Paris, you can see fireworks spouting from the summit or the entire tower glowing bright pink. But no matter when you visit, you can always witness the magic of the Eiffel Tower at night, you just have to know when and where to look.

When can you see the lights on the Eiffel Tower?

If you’ve spent any significant amount of time in Paris, you’ve surely admired the Eiffel Tower by day, but as many Parisians will tell you, it’s even more majestic at night. Every evening at dusk, the tower is illuminated and casts a beautiful, golden glow over the city, highlighting the stunning Haussmanien architecture and numerous monuments.

The Eiffel Tower remains lit up from dusk until 2 a.m. (1 a.m. during winter), but the real spectacle happens every hour, on the hour. For five minutes, the tower is sparkling with 20,000 lightbulbs, and the summit’s searchlight scans the Parisian skyline making for a truly magical scene.

When to watch: The top of the hour from dusk to 2 a.m. (or 1 a.m. in winter) when the tower sparkles

A new millennium: A brief history of the Eiffel Tower’s lights

The Eiffel Tower didn’t always put on a nightly light show. If we really look at it, it’s impressive how much effort it took to make this monument shine.

Back in 1999, the Eiffel Tower was set to be fitted out in thousands of lights to celebrate the new year. It took 25 mountain climbers just over five months to install 20,000 lightbulbs on the tower, and all to the tune of €4.5 million.

Well, the now-beloved sparkling lights of the Iron Lady were originally only meant to be a temporary exhibition to ring in the new millennium, but thankfully they stayed on and have been a permanent fixture since 2003.

The Eiffel Tower lights by the numbers

Can you take photos of the Eiffel Tower lights at night?

You might have heard you’re not allowed to photograph the Eiffel Tower lights at night. However, as of 2016, you can take photos of the Eiffel Tower, even when it’s lit up at night, if it’s just for personal use, like holiday travel mementos.

Watch the video above for a full explanation. It’s pretty interesting!

Can you climb the Eiffel Tower at night?

The Eiffel Tower’s open hours during the peak season (June 1–Sept. 1) are usually 9 a.m. to 11:45 p.m., which means you can also climb the Eiffel Tower at night — and this is an experience I would definitely recommend. There’s nothing quite like being hundreds of feet above Paris and seeing the city and the tower light up and come to life as night falls.

Local tip: Try to plan your climb for during or just after sunset. You’ll be able to see a beautiful Parisian sunset and see the lights come on over the city, and of course on the tower itself.

When to see the Eiffel Tower fireworks 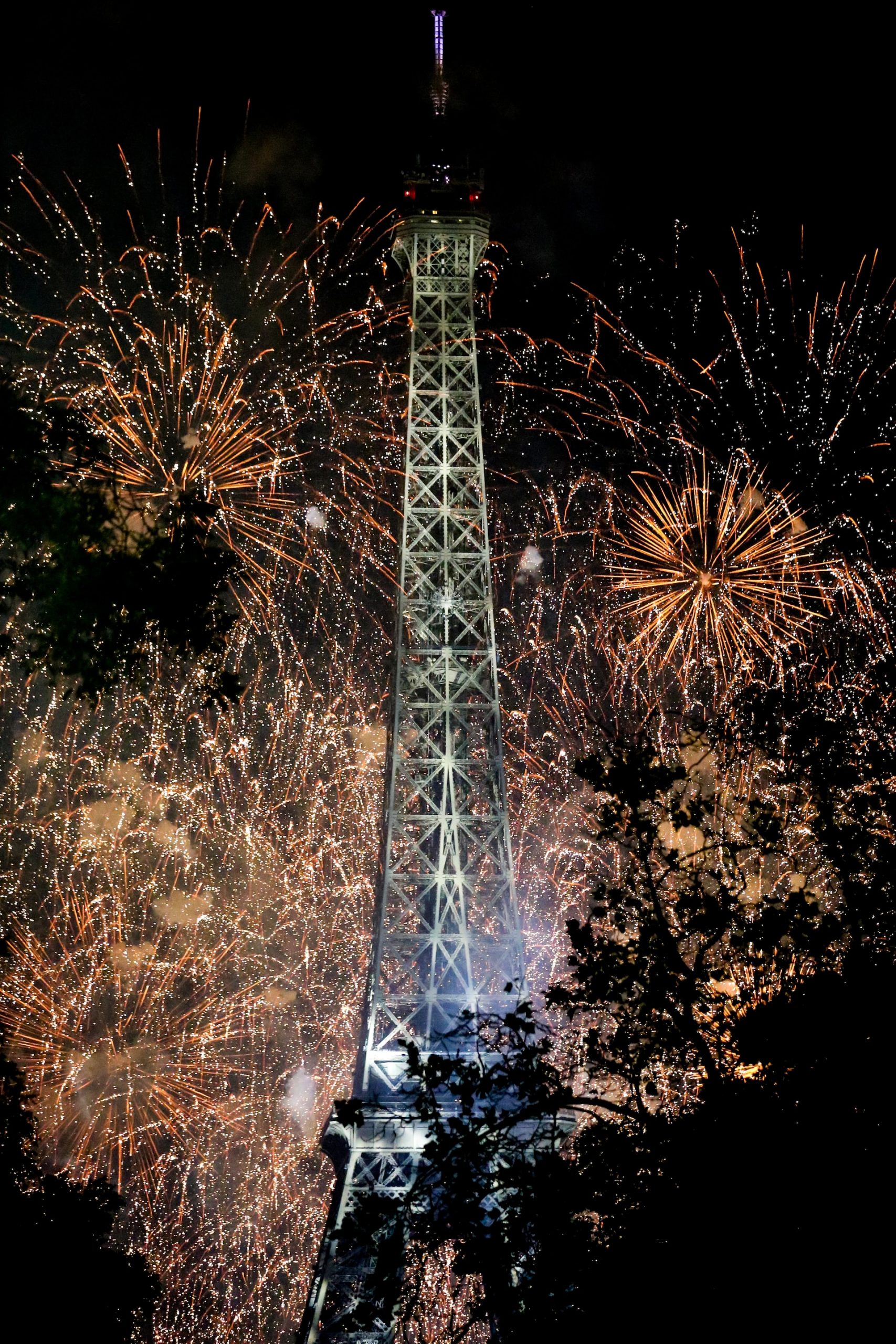 Every year on the 14th of July, Paris puts on an exceptional fireworks display at the Eiffel Tower to celebrate the storming of the Bastille, sometimes called Bastille Day, especially in the U.S., but the French call it the “Fête nationale,” or national festival.

The firework show begins just after dark, but there are all kinds of events and festivities going on around Paris during the day: parades, concerts, and open-air parties and picnics.

The grassy knoll in front of the Eiffel Tower generally fills up with hopeful spectators well before mid-afternoon, but there are plenty of great (and less crowded) places in the city to watch the fireworks from. Some of my personal favorites are the Jardin des Tuileries near the Place de la Concorde, the Avenue de Saxe, l’Esplanade des Invalides, or from Montmartre just in front of the Sacré-Coeur Cathedral.

And if you’re lucky enough to ring in the New Year in Paris, you can expect to see an impressive Eiffel Tower light show then, too.

5 amazing places to see the tower by night

While the Eiffel Tower is visible from most neighborhoods in Paris at night, there are some locations that truly stand out. Here are my top 5 recommendations:

This beautiful residential square is tucked away right in the middle of the 7th arrondissement and often overlooked by passersby. Boasting an excellent and unobstructed view of the Eiffel Tower, this is one spot to go if you’re hoping to take some unique photos of the Iron Lady by night.

Location: The entrance to the Square is located at 37 Avenue Rapp, just between the Post Office and the Luxembourg Embassy.

This upscale restaurant and bar atop the Musée Quai Branly not only serves up delightful and refined French fare, but offers a stunning view of the Eiffel Tower from most every table. The amazing view, good food, and quiet atmosphere make Les Ombres a lovely option for a romantic evening in Paris.

Easily one of Paris’ most famous monuments, the Arc de Triomphe stands at the end of the busy Avenue des Champs-Elysées and offers a 360° view over Paris from its viewing platform. This is really the perfect place to see the Eiffel Tower by night and catch the ambiance of bustling Parisian nightlife.

This trendy rooftop bar is perched 60 meters above Paris, just a stone’s throw from the Gare de Lyon train station. Here you can enjoy incredible, unobstructed views of the Eiffel Tower (and the entire city to be honest) from a lounge chair or beanbag, craft cocktail in hand.

The Bir-Hakeim bridge traverses the Seine to connect Paris’ 15th and 16th arrondissements. This bridge is famous for its artful steel arches and antique lamps, as well as its appearance in the hit film “Inception.”

But without a doubt, the Pont de Bir-Hakeim is one of the best places in Paris to see the Eiffel Tower. Framed by the classic Parisian architecture and the Seine river, it’s what photo dreams are made of.

Lights out at the Eiffel Tower

When the Eiffel Tower declares “lights out” at 2 a.m. and stops sparkling for the evening, the city breaks into two parts: those who will see what an entire night out in Paris has to offer, and those who will make their way home awaiting a day of exploration come tomorrow.

For some other ideas for your Eiffel Tower visit, check out our blog post on Everything You Can See from the Eiffel Tower.