How the Eiffel Tower Lights Up for Special Events and More 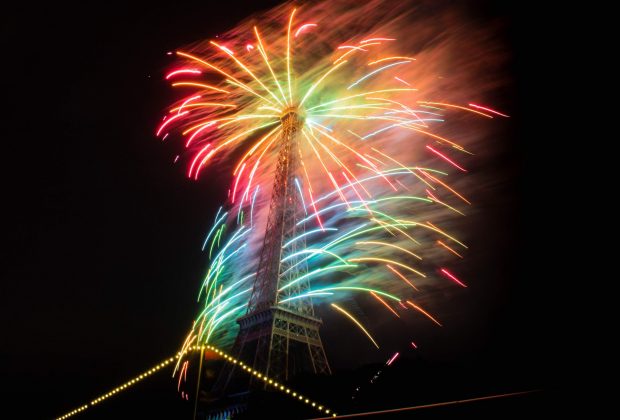 Have you ever wondered how the Eiffel Tower is lit? Is it lit from the inside or the outside? Or both? And who decides how and when it should be lit? And who pays? Having lived in Paris for decades, I still had no idea how the nightly show was made possible. I was curious to find out, so I asked Jérôme Chupin.

Chupin is the managing director of Magnum, the company that has been lighting the Eiffel Tower for special occasions for more than 25 years. He explained that there are two distinct lighting systems — the basic Eiffel Tower lighting and the special events lighting. Magnum is only responsible for the latter. I’ll cover both below.

So here it is: everything you ever wanted to know (and didn’t even know to ask) about the Eiffel Tower lights at night and for special events.

By basic, I don’t mean boring. This is just the default, and the default is quite pretty.

Every night, the Eiffel Tower lights up. It’s an orange-yellow glow that tourists and locals like myself have come to love.

So how does the tower get lit up at night? The basic orange-yellow lighting is provided by 336 high pressure sodium lights. These lights turn on automatically at nightfall thanks to sensors.

Designed by Pierre Bideau to illuminate the Eiffel Tower from bottom to top, the system was inaugurated on Dec. 31, 1985, to replace the 1,290 projectors in place since 1958. The 1985 projectors were modernised in 2004, reducing the electricity consumed by each projector from 1,000 watts per hour to 600 watts per hour. In addition, there are four 200-watt LED projectors that illuminate the antenna at the tower’s summit.

The sparkling Eiffel Tower lights you see each night are considered part of the basic lighting.
So, too, is the powerful searchlight at the very top of the Eiffel Tower which, given the right weather conditions, can be seen up to 50 miles (80 kilometers) away.

How does the Eiffel Tower searchlight work? Here’s what I learned:

Fun fact: The searchlight was installed at the same time as the flashing lights to celebrate the new millennium.

Worried about how much energy the flashing lights consume? Don’t fret. The 20,000 light bulbs are only 6 watts each and light up randomly, each light bulb independent from the others.

When to see the nightly light show

The golden, glittering Eiffel tower lights sparkle for five minutes on the hour, starting at nightfall, superimposed over the general orange-yellow lighting.

But when that is switched off at 1 a.m., something special happens. The sparkly lights have their own show, on a darkened Eiffel Tower, for five minutes. That’s something to look out for if you’re outside between 1 a.m. and 1:05 a.m.

As for the searchlight at the top, it’s switched on and off at the same time as the basic lighting.

What about those other things in the photo above that look like a searchlight? Those are spotlights, part of the special Eiffel Tower lighting.

Speaking of which, let’s talk about those special Eiffel Tower lights.

The special events lighting is the work of Magnum, and these are pretty exciting.

“We’ve done at least 50 different illuminations of the Eiffel Tower over the past 25 years,” explains Chupin, adding that “projectors have changed so much that it’s become easier for us and cheaper for our clients.”

What does the Eiffel Tower special event lighting look like? It depends. Here are some examples from over the years:

The EU flag decorated the Eiffel Tower in 2008 and again in 2022 to mark France taking over the six-month revolving presidency of the European Union.

“Fourteen years ago it was much more complicated and three times more expensive,” Chupin says, “because back then our projectors were not waterproof, so it was really complicated to find the right kind of glass to protect them. Today we have LED projectors that are waterproof. Makes things much easier.”

Who decides what the Eiffel Tower illumination will be?

So who decides what special lighting effects are needed? And who pays?

Well, the answer to both is the same. It’s one of three groups:

“We normally begin discussions for a project about two months beforehand, but for really big projects, such as the Rugby World Cup in 2023 or the Paris Olympic Games in 2024, we’re already discussing various ideas,” Chupin says.

But once he only had 48 hours to put something together. Here’s how he tells it:

“It was after the Bataclan terrorist attack on Friday, Nov. 13, 2015, just before midnight. The next day I got a call from City Hall asking if we could light the Eiffel Tower with the French flag by Monday evening in time for the main news broadcasts. I said no.

“But they called again on Sunday, so I said we’d do what we could, and by 5 a.m. on Monday, I had my teams of climbers and electricians ready. The red lights up to the first floor and the blue lights from the third floor to the summit were LED but the white in the central part was produced by HMI projectors that we set up on the roof of the restaurant.”

Hydrargyrum Medium-Arc Iodide is a type of light that uses an arc lamp instead of an incandescent bulb.

Meaning behind the Eiffel Tower lighting

As you can see, the Eiffel Tower’s colored and patterned lights often have a special meaning, whether it’s to celebrate an event or commemorate a tragedy.

Past illuminations have marked everything from Paris Fashion Week to an environmental conference to major sporting events to an anniversary as shown below.

At the July 14, 2013, celebration, for example, Magnum did a cool rainbow color effect to honor South Africa (“the rainbow nation,” which was being celebrated that year in France) — although a Parisian newspaper misinterpreted it as being a request by the openly gay mayor of Paris at the time to represent the LGBT flag.

Like so much of the art in Paris, it’s open to interpretation.

Where’s the best place to see the lights from?

Generally the best place to photograph the illuminations is from the fountains at the Trocadero, just on the other side of the river Seine from the Eiffel Tower.

“That way you also get the reflections in the water,” Chupin advises.

Not only that, but if you consider the Eiffel Tower as a giant screen, the “front” is generally the facade that faces the Trocadero, so the most detailed part of the illumination is usually on the Trocadero side.

The “front” of the tower for the illumination sometimes changes. For example, for the Olympic Games, the main facade will be the one facing the École Militaire since some sporting events will be in the gardens between that monument and the Eiffel Tower.

Next time you admire the Eiffel Tower in its simple dress of golden light or, for an occasion, decorated with more sophisticated colored lights or even fireworks, spare a thought for the minds and technology that make it all possible.

If you’d like more ideas on enjoying one of France’s most visited monuments day or night, read our guide to the Eiffel Tower through the seasons to plan your trip. But whenever you visit, be sure to come back after sundown for one of the world’s most famous nightly light shows!