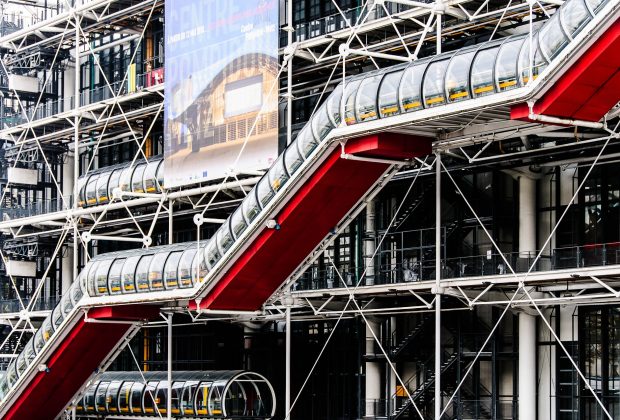 If you’re obsessed with architecture and find yourself in the beautiful city of Paris, France, you’re in the right place for some of the world’s most influential innovations in construction. And the Eiffel Tower is just the beginning.

Every day, I’m shocked at the many architectural feats that are surprisingly modern yet classically historic and say so much about the different parts of the city. They make strolling through Parisian streets an activity all its own.

Here’s a list of five of the best architectural finds in Paris besides the Eiffel Tower. I also cover how each one compares to the famous tower — which some might say is the true epitome of French architecture.

Next to the Eiffel Tower, the Quai Branly art museum is an architectural sight for the books.

Here, you can take in art from various countries in Africa, Asia, and more. Designed by Jean Nouvel, this beautifully constructed building resembles a bridge, held up by stilts, encrusted with boxes of multiple colors.

I personally love the Quai Branly Museum (“Musée du quai Branly” in French) because of the diversity of the various artifacts and art that you can get lost in. Use your imagination and think about how those cultures once lived. You get so much insight into their histories from the exhibits. It’s fascinating.

How it compares to the Eiffel Tower: It’s the closest to the tower, just a few yards from the entrance facing the Seine. But it’s much newer than the iron monument, built in 2006.

The most recognizable landmark on this list, the Centre Pompidou, with its bizarre piping, external escalators, and windows, won’t disappoint architecture buffs. It’s worth a stop just to take a photo of the intriguing exterior.

Indoors, you can visit the library and the modern art museum for thought-provoking exhibits. Admire works of cubism, surrealism, Fauvism, and more as you appreciate how this odd building perfect suits the artwork inside.

On the top floor, go out on the balcony to enjoy the views. Even the ride up in the tube escalator is a visual treat.

Every visit to the Centre Pompidou is a memorable one for me because it’s somehow always unexpected and moving. The exhibits are highly creative, too — one moment you could be questioning the composition of a painting and the next you could be exploring a room that looks like the inside of a cloud.

How it compares to the Eiffel Tower: Pretty similar, surprisingly. Both structures have some fairly stark architecture, and Parisians hated them both when they were first built. They also both have great views of Paris, though the Centre Pompidou is much closer up. Admire the Parisian rooftops and balconies from overhead.

You can see inside the Sacré-Cœur Basilica for free, making this a must for your architecture tour of Paris. The basilica stands at the highest point of Paris in Montmartre. Not only is it exquisite from the outside, but indoors, you can view the elaborate stained glass windows, sculptures, and more.  And don’t forget the stunning apse mosaic, one of the largest mosaics in the world.

Montmartre is my favorite neighborhood in Paris because there’s no end of things to do here. After touring the basilica, you can get your portrait sketched by a local artist, admire the views from the hilltop, stop and have a coffee in one of the many charming cafés — and more.

But don’t miss the gleaming Sacré-Cœur on the hill. The architectural style is a blend of Byzantine, Romanesque, and a certain something else. It’s glorious.

It’s no surprise that three of the five architectural must-sees on our list are museums. When there’s going to be world-famous art inside, Parisians like to make sure the outside looks sharp, too.

The famous pyramid of the Louvre museum is a classic example. The man behind the brilliant design was I. M. Pei. Born in China, Pei immigrated to the U.S. where he studied architecture and launched his career creating uban masterpieces around the world. The Louvre pyramid is undoubtedly his most famous work. Even if you don’t go inside, it’s fun to visit and snap a photo of this iconic sight.

Afterward, you can take in the beautiful sculptures in the Tuileries Garden right outside the museum.

I love the Louvre because you could visit every day for a month and still not see it all. It helps to have a guided itinerary or tour here because of the sheer quantity of exhibits. It can be overwhelming (in a good way), but if you do opt to go it alone, I recommend getting an early start and prioritizing the areas of the museum you want to see the most.

In the Bois de Boulogne, a forest that lies on the outskirts of Paris city limits, you’ll find a ship-like structure, erected in the middle of these gorgeous woods. The Fondation Louis Vuitton serves as a cultural events center and art museum, but it’s unusual enough that architecture lovers will want to see it for its own sake.

Witness the lightness and transparency of the foundation’s architecture along with its giant wing-like top. There’s also a fountain installation in constant motion underneath the terrace.

From the upper terraces, you can even see the city of Paris and, yes, the Eiffel Tower, far off in the distance.

How it compares to the Eiffel Tower: Like the Eiffel Tower, the Fondation Louis Vuitton is a destination unto itself. Families can enjoy the nearby Jardin d’Acclimatation theme park just like Eiffel Tower visitors have the Carrousel de la Tour Eiffel. Both have great dining options. And both are surrounded by parks, though the Bois de Boulogne wins at 2,155 acres. The Champs de Mars, which fronts the Eiffel Tower, is closer to 60 acres.

Architectural Sights in Paris Beyond the Eiffel Tower

So there you have it: the best spots in Paris for architecture lovers besides just the Eiffel Tower. The Eiffel Tower is by far the most famous architectural sight in Paris, and it’s the one we can’t help but compare all others, too.

But Paris is a treasure trove of architectural oddities and wonders. Next time you’re in the city, take a walk down one of the side streets and keep your eyes peeled. An old cathedral bell tower, a wrought-iron balcony filled with flowers, an industrial building brightened with a contemporary mural — you never know what you’ll find here in Paris.

Climb the stairs up the Eiffel Tower with local guides