The Eiffel Tower in Movies: Comedies, Dramas, and More

Paris has the reputation of being the world’s most romantic city, and the Eiffel Tower is its iconic monument, so it’s not surprising that it features not only in countless romantic comedies but also in spy movies and sci-fi, dramas and documentaries.

While this isn’t a definitive list of all the movies in which the Eiffel Tower appears, it does include some of the best as well as lesser-known favorites worth putting on your must-watch list.

Here is the Eiffel Tower in movies through the years.

Silent films with the Eiffel Tower

The first time the Eiffel Tower was filmed was in 1898, barely 10 years after it had been built.

“Panorama during the ascent of the Eiffel Tower” is a 42-second film by Auguste and Louis Lumière, shot from the elevator. It gives a fascinating view of what the Trocadéro, on the opposite bank of the Seine, looked like at the time.

“The Crazy Ray,” also known as “At 3:25” and by its French title “Paris Qui Dort” is a 1924 French science fiction silent comedy directed by René Clair in which a night watchman who sleeps at the very top of the Eiffel Tower wakes up to find that everyone but him and five others in Paris have been frozen by a crazy scientist using an invisible ray.

In 1928, Clair shot a silent film, just 14 minutes long, called “La Tour,” which you can watch for free.Fun fact: Clair said he shot “La Tour” for his own pleasure “to the glory of this big iron lady that I’ve always been in love with” and because he’d been frustrated at not being able to film as much of the Eiffel Tower as he’d wanted in “The Crazy Ray.”

The Eiffel Tower in musicals and comedies

The Eiffel Tower continued its movie star career into the mid 20th century.

“The Lavender Hill Mob,” released in 1951, is a British crime comedy in which a meek bank clerk who oversees the shipment of bullion joins with an eccentric neighbor to steal gold bars and smuggle them out of the country as miniature Eiffel Towers. The scene where Holland and Pendlebury run down the Eiffel Tower’s spiral staircase and become increasingly dizzy and erratic, as does the camera work, has become a classic.

Then in 1957, Fred Astaire and Audrey Hepburn starred in “Funny Face,” a romantic musical with an iconic number filmed at the Eiffel Tower which you can see at the 36:31-minute mark.

“Zazie in the Metro” is a 1960 French comedy by Louis Malle.

Zazie, an 11-year-old country girl, arrives in Paris to spend a weekend with her uncle Gabriel in Paris. She really wants to ride the metro, but it’s closed because of a strike, so Gabriel shows her other iconic landmarks, including the Eiffel Tower where a group of tourists mistake him for a guide.

Five years later, Blake Edwards made “The Great Race,” the story of a car race between New York and Paris in which the competitors can use any means to be the first to cross the finishing line, which is, of course, at the foot of the Eiffel Tower.

The Eiffel Tower in romantic films

The Eiffel Tower serves as the backdrop in a number of romantic movies. Here are some of the best.

A number of disaster, thriller and science fiction movies have also featured the Eiffel Tower. Here are some of the best.

“The End of the World”

Abel Gance’s 1931 film “The End of the World” is one of the first French full-length talking movies. In this short documentary about the film, you’ll see the segment shot at the Eiffel Tower with the fictional collapse of one of the elevators.

François Truffaut’s first feature length film, “Les 400 Coups” (or “The 400 Blows”) released in 1959 is somber. It opens with the credits filmed with the Eiffel Tower as the fixed point. This major French film tells the story of 12-year-old Antoine Doinel who lives with his indifferent parents in a small apartment in Paris. He’s a trouble-maker at school and gets up to all kinds of misadventures, which lead him on a tragic downward spiral.

The 1985 Bond movie “A View to a Kill” gives me sweaty hands as Roger Moore, alias James Bond, chases Grace Jones, alias May Day, up the stairs of the Eiffel Tower before she (actually stuntman B.J. Worth) jumps off.

According to the film’s director, John Glen, the sequence was complicated because permissions had to be obtained not only from the Eiffel Tower authorities — and there are very strict rules about stunts from the tower — but also from the Paris authorities as that’s where Worth was landing!

As the bottom of the tower is much wider than the top, a ramp was built for Worth to jump off to ensure he would jump wide enough. He began practicing by jumping from hot air balloons, while producer Michael G. Wilson calculated that Worth had to open the parachute three and a half seconds after jumping. And he only got one go, at dawn on August 4, 1984, one of the first scenes to be filmed.

It’s not the real Eiffel Tower, of course, but these two films are worth a mention.

The first is a relatively recent Disney classic. “Ratatouille,” released in 2007, is the story of a rat, Rémy, who lives in an attic just outside Paris and whose greatest ambition is to become a chef. Having had to flee from the attic he gets lost and eventually scuttles up onto a rooftop from which he gets a wonderful view over the city with the Eiffel Tower in the center. The tower pops up several times during the movie.

“Ballerina” is a Franco-Canadian animated movie that came out in 2016 about Félicie, a poor red-headed orphan from Brittany whose dream is to become a ballerina in Paris at the time of the World’s Fair in 1889. The first appearance of the Eiffel Tower in the film shows it still under construction. 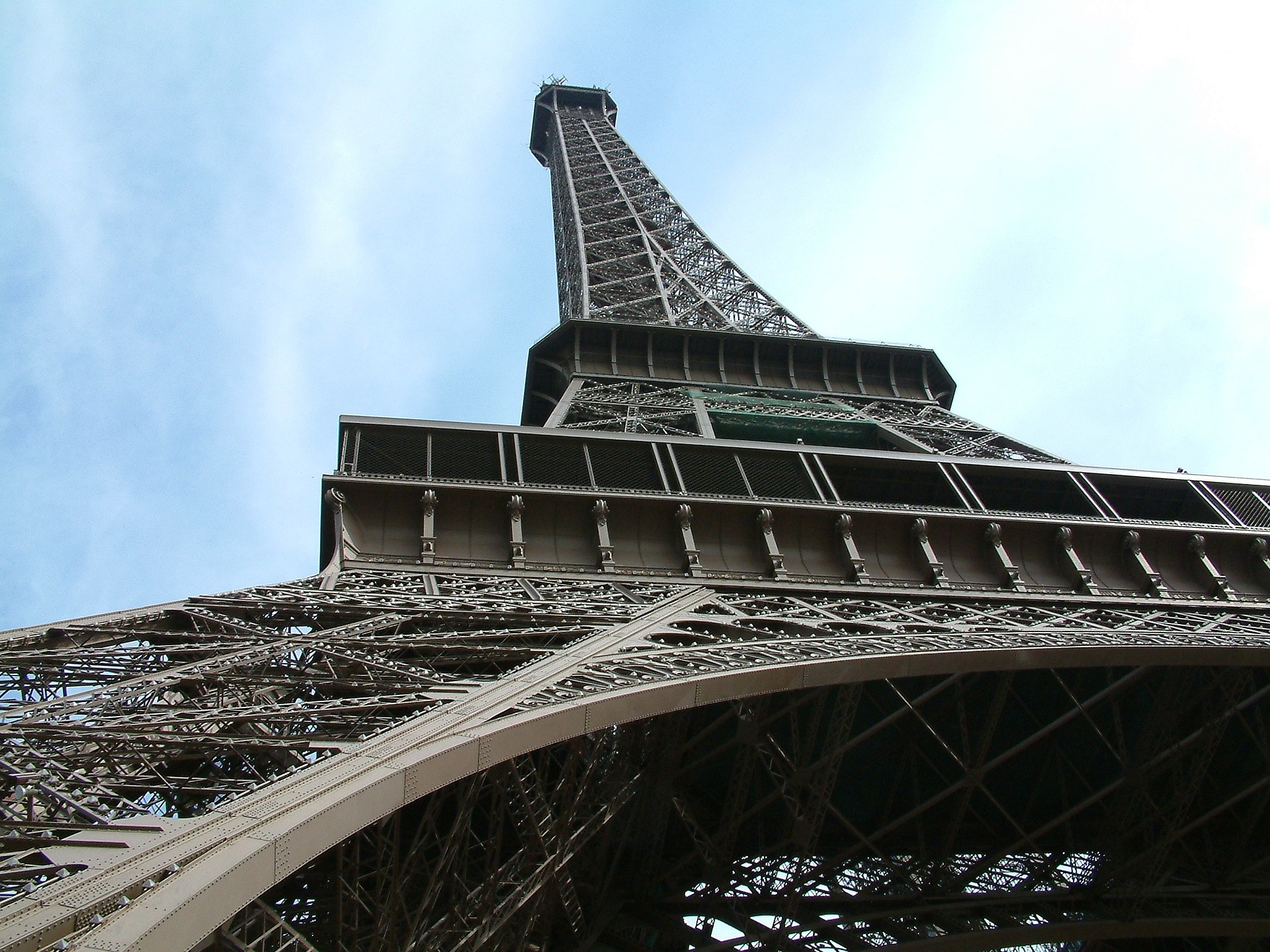 If there’s one movie to see before you visit the Eiffel Tower yourself, I highly recommend a 2005 French 90-minute documentary fiction directed by Simon Brook called “The True Legend of the Eiffel Tower” (“La légende vraie de la Tour Eiffel”), shown above. It’s a fascinating account of how the Eiffel Tower came into being.

Fun fact: In this movie, we learn that it was Maurice Koechlin (1856-1946), a Swiss-Alsatian engineer who was the head of Gustave Eiffel’s design team and whose original idea in 1884 of a “300-meter tall pylon” eventually became the Eiffel Tower.

The most recent movie in which the Eiffel Tower features is a Franco-German film produced by Martin Bourboulon (released in France in 2021 and elsewhere this year), called simply “Eiffel.” This biopic concentrates more on a love affair that the famous engineer may have had when he was a young man rather than on the tower that bears his name.

And, last but not least, as I was researching for this piece, I came across these remarkable scenes and outtakes for the May 1953 Pathé News Story “Eiffel Tower Goes Gay.” You’ll see acrobatic painters clambering unattached all over the tower.

Speaking of, how does the Eiffel Tower get its various coats of paint and what colors has it been? Read all about the remarkable story behind the Eiffel Tower’s paint jobs on our blog.