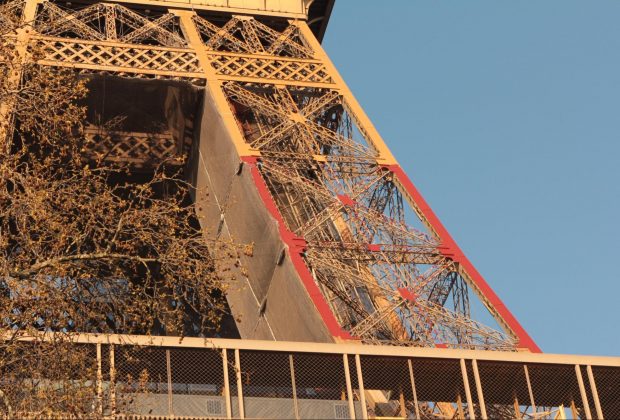 The Eiffel Tower is changing color for the first time in 53 years and returning to the color originally chosen by the man who built it: Gustave Eiffel! The change will be just in time for the upcoming Summer Olympics in Paris.

In this post, I’ll share a peek into the history of the Eiffel Tower’s various colors and what’s coming next for its new makeover.

Why the Eiffel Tower Is Changing Color Now

The photograph above gives you an idea of the different colors the Eiffel Tower has been over the years, in slightly exaggerated form.

“It will give the Eiffel Tower a bit more of a ‘gold’ look for the 2024 Paris Olympic Games compared to the color we were more used to,” says Patrick Branco Ruivo, director of the Eiffel Tower management company (SETE).

Work for this newest Eiffel Tower paint job began in early 2019. It marks the most important restoration of Paris’s landmark monument since it was built in 1889. This is why visitors to the tower are seeing scaffolding and netting around parts of it and why sections of the Eiffel Tower gardens are closed to the public.

​Fun fact: The Eiffel Tower is made from 18,038 sections of puddle iron, a type of wrought iron. They are held together with 2.5 million rivets.

​How is the Eiffel Tower repainted?

The Eiffel Tower is completely repainted every seven years, as recommended by Gustave Eiffel himself. This is the 20th time it has been repainted since it was originally built.

But it’s not as easy as slapping on a new coat of paint. The 19 layers of paint already on the tower are cracking and falling off, so the paint has to be completely stripped off in certain places, right down to the puddle iron.

Painting the Eiffel Tower by the numbers:

Who paints the Eiffel Tower? 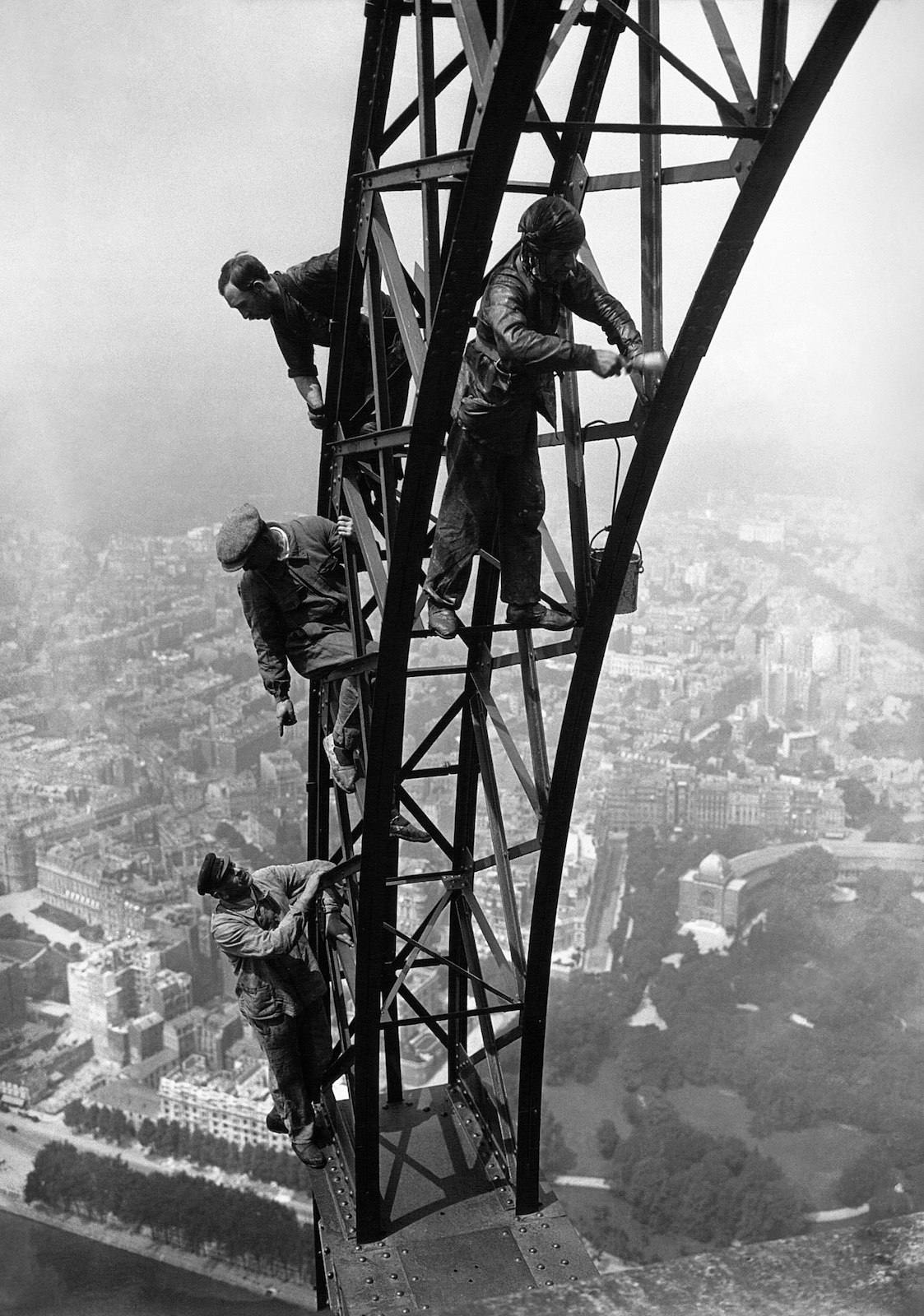 Professional painters handle the Eiffel Tower repainting, and it’s not just a few of them either — it’s a crew of 50.

You won’t see the painters working during your visit because just like the men and women who work on the lighting, the painters only work at night once all the visitors have gone.

These painters are all specialized in work on metallic structures at great heights, just like the painters shown above who worked on the tower almost exactly 100 years ago (in 1924).

Did you know? Painters can only work when the weather conditions are right because the paint can’t adhere to a surface that is too cold or too humid.

Of course, safety is a priority when painting the Eiffel Tower. Today’s painters are equipped with harnesses attached to 31 miles of safety lines which allow them to move around freely while staying attached at all times. They also have to wear special equipment and breathing apparatus because the layers of paint that have been put on the tower previously contained lead.

All of their tools are attached to their belts or wrists including paint pots and brushes. There are also safety nets on the tower to catch any falling objects and paint flakes.

How to repaint the Eiffel Tower: A beginner’s guide

Repainting the tower is no easy feat. It’s over 1,000 feet to the tip, and there’s elaborate wrought iron lattice work all along the way.

Here’s how the painters do it:

Eiffel Tower colors down the ages

The “yellow brown” that the Eiffel Tower is being painted now for the Olympics is the sixth shade it’s worn — the same color it was from 1907-1947.

What colors has the Eiffel Tower been over the years? Take a look:

Will the repainting work affect my visit? 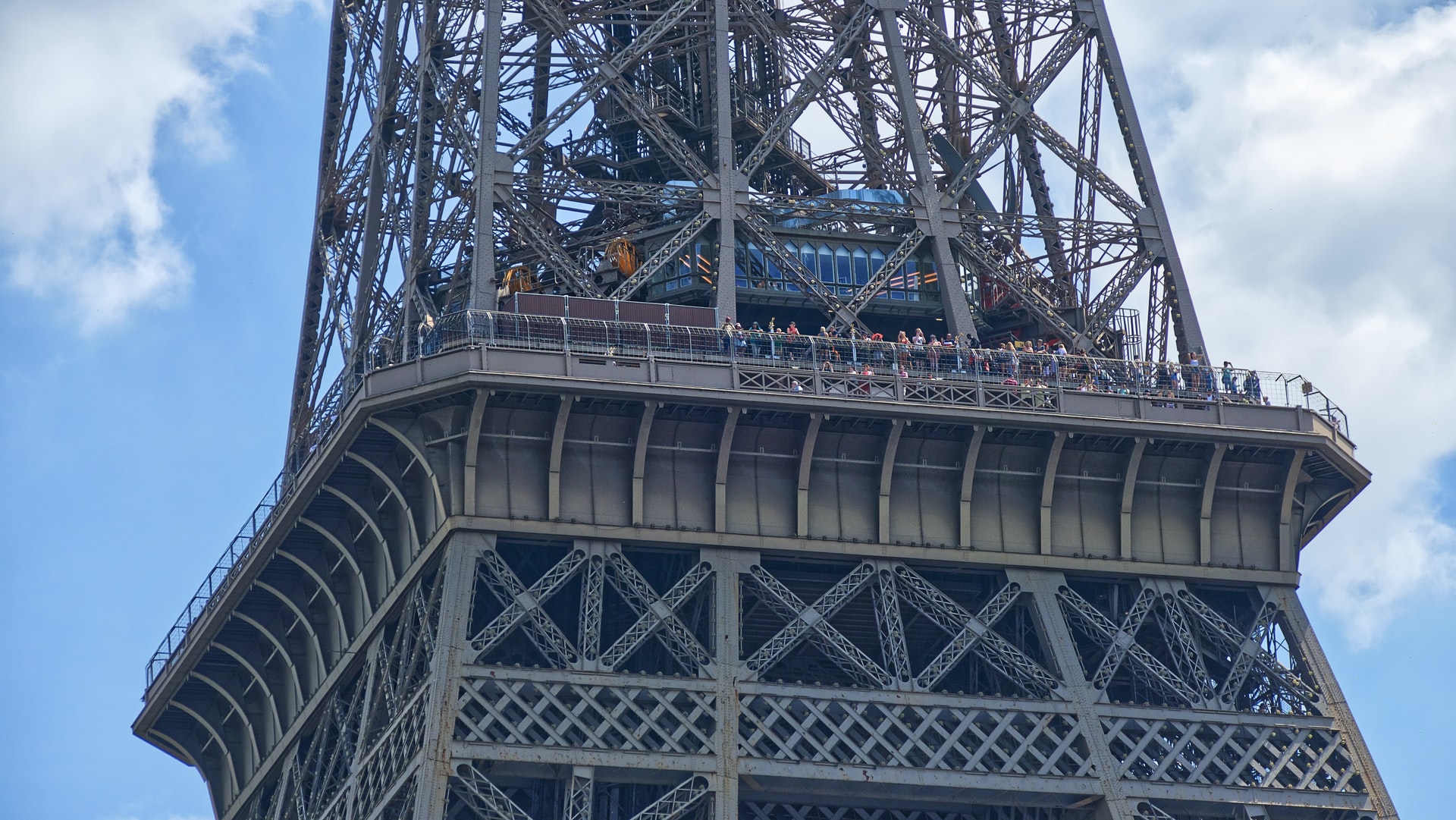 The only thing it will impact is where to take your best Eiffel Tower photos as you may find that the scaffolding is visible from some of the spots we suggest. But there are still plenty of ways to get great photos and not capture the renovation work. And the scaffolding certainly won’t affect what you see when you climb or ride up the tower.

Wondering what your visit will be like? Read our guide to what you can see from each of the three levels.