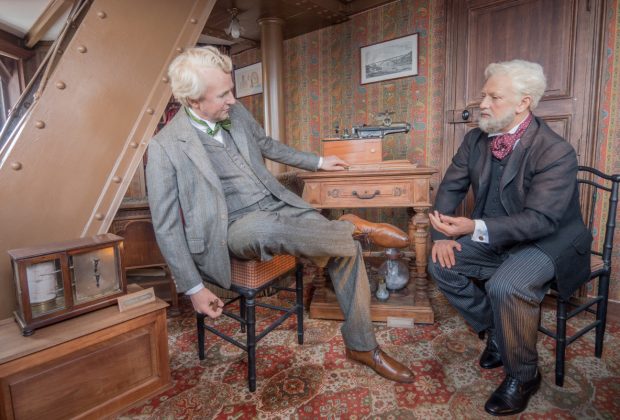 Did you know Gustave Eiffel had an apartment on the top floor of the Eiffel Tower — and that it’s still there today? That’s right, and better still, you can visit it. That means even when it’s overcast and the views from the top aren’t great or if you don’t care about or want to spend money on a glass of Champagne at the summit, there’s still something fascinating here for you: Gustave Eiffel’s office.

In this blog, I’ll share the history of why Gustave Eiffel’s office is inside the Eiffel Tower, everything it includes, and how to see it if you go.

Why Gustave Eiffel had an office in the Eiffel Tower

When Eiffel built his tower, he reserved a corner, a pretty large one, for himself. He built an apartment covering 100 square meters (1,076 square feet) on the upper platform of the tower, just above the third floor and just below the campanile which crowned the tower. Essentially, he had the best view in Paris.

A large part of the surface of this apartment was occupied by the elevator cabin, the stairwell from the lower floor and various technical installations.

In the apartment, there was a living room, furnished with a table, sofa, and even a piano, three small offices, a kitchen, and a bathroom with sink and a toilet. But no bedroom. So the rumor that he lived there is probably just one of those Eiffel Tower myths. This was clearly a space to comfortably accommodate distinguished visitors and to work on the scientific experiments that Eiffel intended to conduct from the tower. (More on these meteorological and other experiments below.)

Everything inside Gustave Eiffel’s summit office

Of the larger apartment, little remains. There’s no kitchen or bathroom, but you can see a small office that gives you a glimpse into Eiffel’s working space.

And most noticeably — it’s not empty.

Yes, there are three figures inside, made by the famous waxworks at the Musée Grévin.

Here are the three wax models in Eiffel’s office.

The decor in the apartment reflects the aesthetic of the late 19th century. There’s ornate brown furniture, paisley-patterned wallpaper, a gas table lamp, and a bookcase full of leather-bound books.

There’s a phonograph sitting on the table between Edison and Eiffel, representing a gift Edison gave to Eiffel, and you can almost hear Edison, sitting there, explaining to a fellow scientist how it works.

Local tip: If you’d like to see an earlier version of Edison’s phonograph, head to the Musée des Arts et Métiers, 60 rue Réaumur in Paris, and for other early phonographs, to the Phono Museum, 53 boulevard de Rochechouart.

Who else visited Eiffel at the top of the tower?

Many famous people of Eiffel’s day visited his office, so when you’re looking into it, remember that you may be standing at the very place where the rich and famous stood before you. Not everyone necessarily met Eiffel himself there, but we do know a little about who visited the Eiffel Tower summit apartment.

Other personalities: Buffalo Bill, the American Wild West showman, who spent six months in Paris in 1889. His Wild West show during the World Fair was considered one of the highlights of the event. His name is recorded in the Golden Book that Gustave Eiffel kept for visitors in his tower-top apartment.

Why did Eiffel want an apartment at the tower? 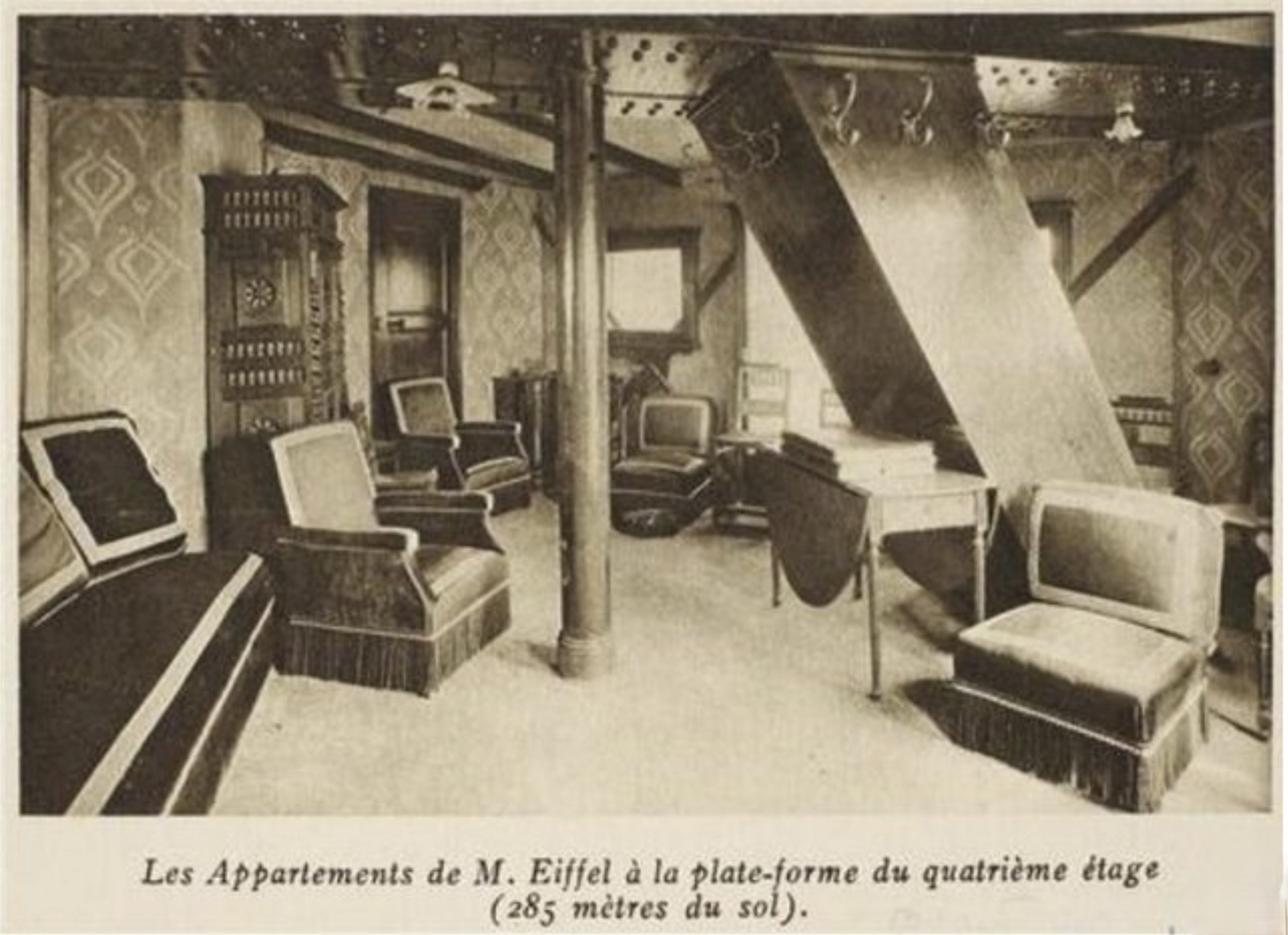 He wanted it for several reasons.

For one, he had personally paid for three-quarters of the cost of building the tower and demanded in return that he have this apartment as a personal concession for 20 years. This was subsequently renewed before being handed over to the city of Paris.

Fun fact: With nearly 2 million visitors in the first year, Eiffel quickly got his money back!

Although he had offices elsewhere, he wanted a space, very high above Paris where he could bring his great-granddaughter, Janine Salles, every Thursday, when French schoolchildren had no school in the afternoon (now it’s on a Wednesday) so she could enjoy the “mountain air.”

Eiffel also wanted a place where he could receive distinguished guests and hold meetings with his fellow scientists and engineers. And he thought the summit’s height was a great place to conduct scientific experiments. He built a weather observatory at the top, and the first radio transmissions (for military purposes) took place from the summit.

When was the Eiffel Tower office abandoned? 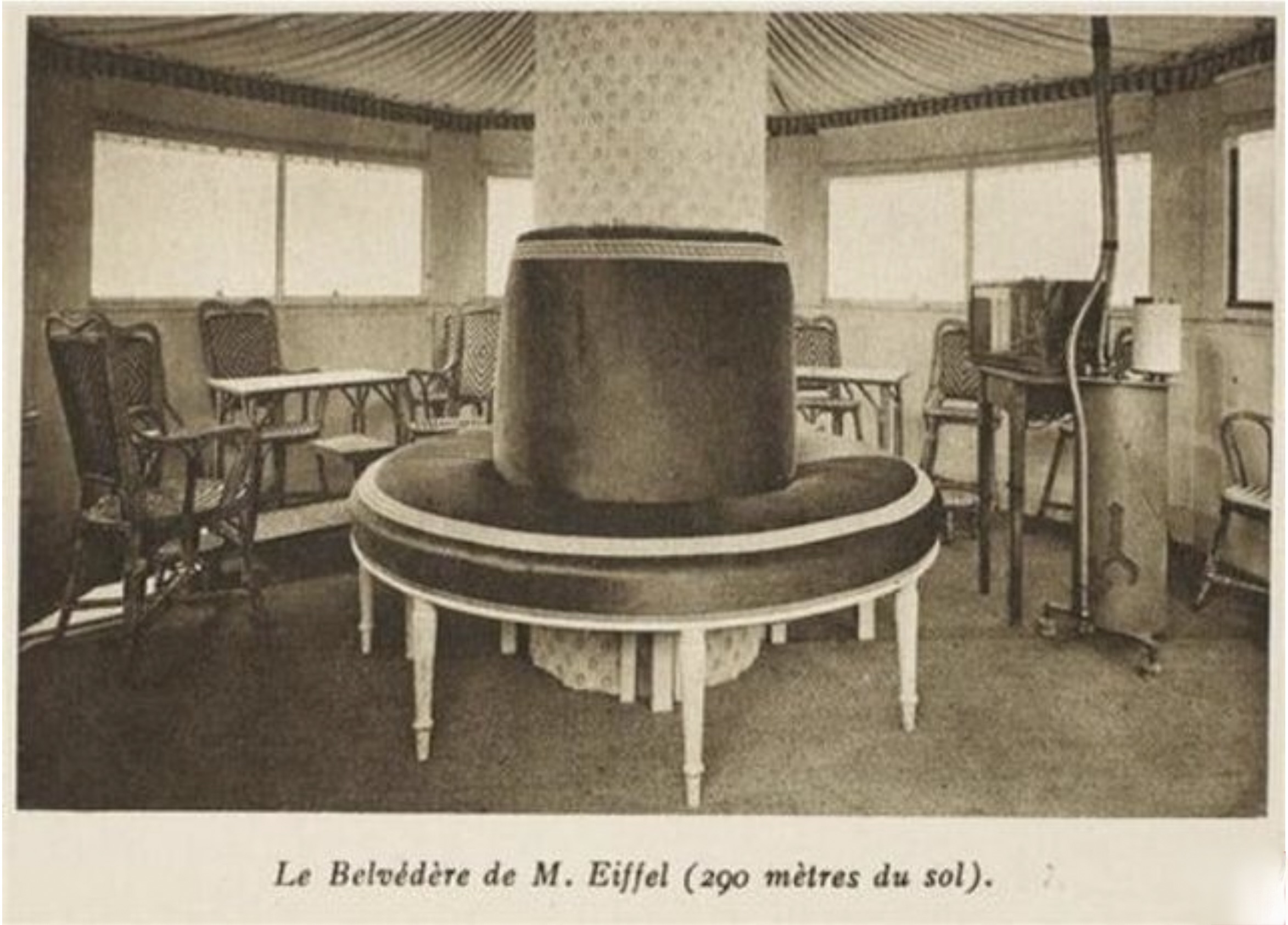 Gustave Eiffel’s office wasn’t in use very long after his lifetime.

After World War II, more than 20 years after the death of Gustave Eiffel in 1923, the development of television and the telecommunications antenna that was set atop the tower required storage space for electrical devices on the top floor.

The apartment was the only available space so it gradually filled with technology until only the small space visitors can see today remained.

Fun fact: Janine Salles was the last person to use this office.

Eventually, part of the office was restored to how it looked at the end of the 19th century, the wax figures were added, and it became part of the Eiffel Tower summit experience.

Did Gustave Eiffel live in the Eiffel Tower?

Nope, as I mentioned above, it was for scientific experiments, meetings, hosting dignitaries and just Gustave’s private leisure, but the office didn’t have a bedroom, so it’s not likely he slept there.

Interestingly enough, Janine did sleep in this apartment at least once that we know of. It was in 1935 on her wedding night — despite the lack of a bedroom. In those days, the elevators stopped at around 7 p.m., so she had the place to herself with her new husband, Laurent Yeatman, over 980 feet above everybody else in Paris!

If you’re visiting the Eiffel Tower summit, seeing Gustave Eiffel’s office is free and included with your visit. There’s an extra cost for visiting the summit on top of a regular Eiffel Tower ticket that gets you to the second floor, however.

We offer the summit as an upgrade to our guided climb and our elevator tour, and your guide can let you know what to look for when you visit Gustave’s former apartment.

Of course, you’ll be viewing it through a window as going inside the office itself is off-limits to regular visitors. The office is only open very rarely for exceptional events or filming.

More at the summit

Along with the apartment, the summit is known for its Champagne bar and incredible views, though Paris landmarks look much smaller from this height of nearly 1,000 feet.

Before you plan to visit the summit, we recommend reading our guide to whether the Eiffel Tower summit is open or closed. Tower staff can close it without any advance notice, so it’s best to come prepared and plan accordingly.

Visit the tower to see it all

Go with a guide
Learn More