World’s First Climbing Tour of the Eiffel Tower: Q&A With the Creator 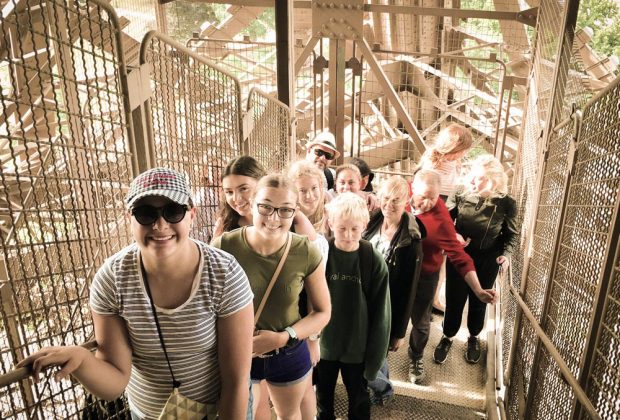 Before 2017, there was no guided climb of the Eiffel Tower. You could take a tour by elevator, but if you wanted to take the stairs — the way the creator, Gustave Eiffel, recommended — you were going it alone.

We changed that, thanks to the courage of one woman who packed her bags and arrived in Paris with a dream and a new idea. Here’s how it all happened, told in the words of Linda Shell, our Paris general manager and the lady behind the world’s first climbing tour of the Eiffel Tower.

Q: What is the world’s first climbing tour of the Eiffel Tower?

A: It’s a guided visit up the Eiffel Tower by taking the stairs instead of the elevator. ExperienceFirst, a global tour operator, launched the guided climb in February of 2017.

The Eiffel Tower Guided Climb (we kept the name straightforward, as you can see) is for anyone. We’ve had kids take it. Older adults take it. History lovers. College students on spring break. Pretty much everyone. There is nothing like experiencing the Eiffel Tower step by step as you climb above Paris and see this magnificent iron structure from the inside out.

Q: Had anyone ever heard of a “climbing tour” for the Eiffel Tower?

A: Nope. At the time, the only way to visit the Eiffel Tower with a guide was by taking the elevator. It was possible to climb the stairs on your own, but there wasn’t one single guided climbing tour of the Eiffel Tower on the market. I knew that had to change.

Q: Why did you decide to create this tour? Tell us the backstory.

By my third day, I decided I wanted to live there for at least a year, just for the adventure. By the end of my first week, I decided I could live here. I would suggest to my boss, Andrew Luan, who founded ExperienceFirst, that we open up the Paris branch — with me running it.

When I proposed the idea to Andrew, he said, “OK, but we have to offer a tour of the Eiffel Tower. Do some research and become an expert on the logistics.”

The first thing I did was look at everyone out there doing guided tours at the tower to see what they offered: prices, times, etc. Then I did research on the Eiffel Tower itself. In my research, I came across a blog by someone who touted the joys of climbing the stairs. I hadn’t considered this option at first — no other tour companies were doing it, but I was intrigued. I told Andrew, “Nobody is doing it, which means it’s either a terrible idea or a brilliant, innovative idea.”

We decided it was the latter, and I was off to Paris.

Q: How was your relocation to Paris?

A: Before Paris, I had established myself with the company as a top-rated guide, and I had the sweetest apartment on the Upper West Side in Manhattan. Everything was perfect, and then I decided to shake things up with a Paris adventure.

I gave away or threw away anything that would not fit in two suitcases and off I went, leaving my apartment, my tour guide job, my friends and family and my hometown of NYC.

I arrived in Paris on January 9, 2017. During those first couple of months I did a lot of walking all over Paris and spent a lot of time at the Eiffel Tower, walking up and down those stairs and around the perimeters of the first and second floors. I also took a couple of guided tours to see how other companies did their elevator tours.

One by one, I started building a team of guides for our new climbing tour. I remember when I met the guides, I’d tell them, “You don’t know us, but Andrew is a brilliant entrepreneur with a sense of adventure, and I am a person who makes things work. We’re about to create the world’s best climbing tour of one of the world’s greatest monuments.”

Andrew has said many times that I have great people skills. All I can say to that is I like to have fun, and I genuinely love getting to know people, putting on a show, and having a party. In fact, I have remained in close contact with many of the guides I’ve worked with over the years, and a few have become very close personal friends of mine.

Q: What makes this tour different?

A: When we launched, it was the only tour of its kind. You could say we’re the first and the best — pros through experience and passion.

Now it continues to stand apart from the competition as the highest rated of its kind due to our constant tweaking of every possible detail of the customer experience on an ongoing basis. We also have the best guides and a special, energetic spirit that even competitors have noticed with comments like, “Your company seems like it has the most fun.” Well, we do!

Q: What’s your favorite memories from the early days of the Eiffel Tower guided climb?

I remember clearly when the first booking came in, and it nearly knocked me off my seat. I never told those first guests that it was the first ever, but I was thinking it the whole time.

I also remember early on, getting an email from one of the managers of the Eiffel Tower staff who wanted to speak with me. She called and said, “We have never heard of this “Guided Climbing Tour” before, and I invite you to come to my office so we can meet and you can tell me what it is.” I felt encouraged that we were getting noticed.

In fact, in the years since we started the guided climb, every one of our competitors has added their version of it and the entire entrance to the stairs has been revamped as a result. But one of the most memorable times was spring break 2017. It was the biggest learning curve of running that tour. The bookings exploded! I went from managing a small handful of bookings per day to hundreds per day literally overnight.

Suffice it to say, our team of guides and I bonded in a big way during those couple of weeks, and we consider it a badge of honor to have survived it. We still laugh about it to this day.

But one of my favorite memories was when Andrew came to Paris with his mom and I gave them a private guided climb with me. The next night Andrew invited me to join him and his mom on a dinner cruise and during the dinner, his mom said something to Andrew in Chinese. Andrew told me, “My mother said you are very brave to come here like you did and do what you are doing.” I never looked at it that way. I was just in the mood for an adventure.

Ready for your next adventure?

So that’s the story of how the world’s first Eiffel Tower climbing tour began. If you feel inspired, why not come to Paris and see how the magic strikes you?

And don’t forget to climb the Eiffel Tower. To help you get excited for your trip, we’ve shared a guide to everything you can see from all three levels of the tower. Remember that the first level with its transparent floor is only open to climbers, and the summit is a separate elevator if you choose to take it (and you should!).

We can’t wait to welcome you to Paris and her most incredible monument. You never know… you might be captured by its spell like Linda was — and want to stay forever.